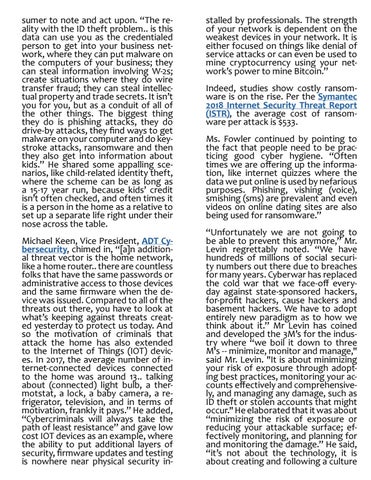 sumer to note and act upon. “The reality with the ID theft problem.. is this data can use you as the credentialed person to get into your business network, where they can put malware on the computers of your business; they can steal information involving W-2s; create situations where they do wire transfer fraud; they can steal intellectual property and trade secrets. It isn’t you for you, but as a conduit of all of the other things. The biggest thing they do is phishing attacks, they do drive-by attacks, they find ways to get malware on your computer and do keystroke attacks, ransomware and then they also get into information about kids.” He shared some appalling scenarios, like child-related identity theft, where the scheme can be as long as a 15-17 year run, because kids’ credit isn’t often checked, and often times it is a person in the home as a relative to set up a separate life right under their nose across the table. Michael Keen, Vice President, ADT Cybersecurity, chimed in, “[a]n additional threat vector is the home network, like a home router.. there are countless folks that have the same passwords or administrative access to those devices and the same firmware when the device was issued. Compared to all of the threats out there, you have to look at what’s keeping against threats created yesterday to protect us today. And so the motivation of criminals that attack the home has also extended to the Internet of Things (IOT) devices. In 2017, the average number of internet-connected devices connected to the home was around 13.. talking about (connected) light bulb, a thermotstat, a lock, a baby camera, a refrigerator, television, and in terms of motivation, frankly it pays.” He added, “Cybercriminals will always take the path of least resistance” and gave low cost IOT devices as an example, where the ability to put additional layers of security, firmware updates and testing is nowhere near physical security in-

stalled by professionals. The strength of your network is dependent on the weakest devices in your network. It is either focused on things like denial of service attacks or can even be used to mine cryptocurrency using your network’s power to mine Bitcoin.” Indeed, studies show costly ransomware is on the rise. Per the Symantec 2018 Internet Security Threat Report (ISTR), the average cost of ransomware per attack is $533. Ms. Fowler continued by pointing to the fact that people need to be practicing good cyber hygiene. “Often times we are offering up the information, like internet quizzes where the data we put online is used by nefarious purposes. Phishing, vishing (voice), smishing (sms) are prevalent and even videos on online dating sites are also being used for ransomware.” “Unfortunately we are not going to be able to prevent this anymore,” Mr. Levin regrettably noted. “We have hundreds of millions of social security numbers out there due to breaches for many years. Cyberwar has replaced the cold war that we face-off everyday against state-sponsored hackers, for-profit hackers, cause hackers and basement hackers. We have to adopt entirely new paradigm as to how we think about it.” Mr Levin has coined and developed the 3M’s for the industry where “we boil it down to three M's -- minimize, monitor and manage," said Mr. Levin. "It is about minimizing your risk of exposure through adopting best practices, monitoring your accounts effectively and comprehensively, and managing any damage, such as ID theft or stolen accounts that might occur." He elaborated that it was about “minimizing the risk of exposure or reducing your attackable surface; effectively monitoring, and planning for and monitoring the damage.” He said, “it’s not about the technology, it is about creating and following a culture 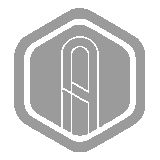